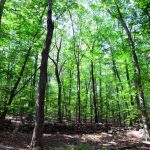 So the mystery of the creepy thing in the woods has been solved—well, maybe not solved, but investigated at least.

I went to the police department yesterday, and told them what I saw. Thankfully there were two women officers at the front desk, so I didn’t feel awkward. Sometimes men have a way of making light of things women fear. I think its because in some chivalrous way they don’t want us to be scared, but it usually makes us feel silly for having the fear in the first place.

Anyway, I was told to meet them at the open space area. They sent a male and a female officer. I was happy they took my concern seriously, and we began the short trek through the woods. Well, to me it was a short trek, and when the male officer asked me how far it was, I said, “Oh, its not too far”, because to me, it wasn’t far. He was like “how far is not too far”, and I cheerfully said “Only about a half mile”, which was a total guess, because I really had no idea, but he didn’t need to know that.

I told him we could probably take a shorter route if he wanted to cut through the woods, but that I was not sure how thick the brush was. He was a really nice guy, but obviously unhappy to make the trek, being very concerned about ticks. I couldn’t blame him for that though because they do carry some nasty diseases. He said “Are you sure you know where it is?”, and I stated “I know exactly where it is”. I don’t think he believed me though, because I was leading them far off the trail and deep into the middle of nowhere. I knew he was doubting my memory and sense of direction as he responded “I just don’t want to be walking all over the place looking for this.”

It kind of annoyed me that he doubted me, and I felt a sort of urgency to get there so I could prove it to him. People who do not spend a lot of time in the woods, like some of us detectorists, do not understand that there are people like us who can wander through the woods all day and not get lost. We note the landscapes, landmarks, stone walls, breaks in stone walls, signs of old roads, the ages and types of trees, poison ivy patches, deer trails, flat areas, water sources, and usually have a decent knowledge of colonial farm plans. It becomes second nature to us, with a kind of mind map of the area noting these things automatically.

I knew my mind map was spot on, so I didn’t hold it against him for thinking I didn’t know where I was going… Men are North, South, East, West types. Had I had a compass and said “It’s Southeast from here”, he probably would have felt more comfortable.

It was funny though, because the female officer didn’t say anything, she just trusted that I knew where I was going. Girl power—yay!

I could see on the way down the last hill that the creepy thing was still hanging in the tree. I sighed a thank God sigh, and led them to it. I could tell by the looks on their faces that I was not alone in being creeped out by it.

They spent a good twenty minutes investigating the gloves and the area. The female officer was quite brave. She donned gloves, took the bloody gloves out of the tree, examined the liquid (blood) inside, even smelling it (gross), said it was definitely organic, and even noticed the dug up ground and examined that. The male officer surveyed the area for signs of wrong doing, bones, or possibly a body, they didn’t say, but I knew what they were looking for.

The female officer said with a worried expression that there was something white inside the gloves, and it looked like wrinkled paper, but upon further examination, determined there was another pair of white rubber gloves inside the plastic gloves. I heard her say she thought they should get a dog in there just to be sure, so they took pictures and sent them to someone (and no, I did not get pictures, I did not think they would appreciate me taking photos as they were investigating). The person they sent the pictures to, said they were definitely hunters gloves, so the conclusion was that a hunter had probably gutted a deer and left them there.

They did not take the gloves with them, but they did, look around a bit more, to be sure, and it was weird because other than the gloves, there was no sign of a deer gutting. I’m not a hunter, but when I was younger, I dated a few hunters, and the field dressing was not always a clean process. There was sometimes a lot of hair, and other stuff, which I’m sure some animal could have eaten, but not the hair, even when you see deer remains scattered in the woods, the hair is there along with the remains.

We’ll never know what really happened there. Perhaps the hunter was an expert deer dresser, and left no signs except for the gloves, or he gutted it elsewhere and decided to leave the gloves wrapped around a random tree branch, or maybe there was some foul play committed by someone wearing deer dressing gloves? But, the creepy thing had been investigated, and that was all that mattered.

Thank you to everyone who emailed and messaged me imploring me to go to the authorities. My conscience is now clear, and I’m not going to worry about it anymore.

When I had them safely back on the trail, the female officer said “I hope you left your information with the front desk, because you’re a great resource, and you really know your way around in the woods”. I told her that I had, and that if they ever need help that detectorists and Metal Detecting club’s will help the authorities in investigations, and are always happy to help if needed.

So a few good things came out of this; there were no dead bodies found, the police department now knows what a valuable resource we can be, and my conscience is clear.

Comments (6) on “The Creepy Thing in the Woods Mystery Solved”