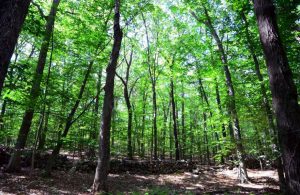 To all of you who have been kind enough to to inquire as to my whereabouts, and general well being in the past few months, Thank you. I’m okay. I did not retire from detecting. I’ve been having issues with my website that I did not have the time or expertise to address. Everything seems to be in order now though, so hopefully I can continue to entertain you with tales of the hunt, and/or anything else metal detecting related that I can think to write about.

This happened well over a month ago, and I have been trying to forget about it, but sometimes stuff just stays with you…

I was hunting an open space area in Wilton, CT, alone. As sometimes happens when detecting, I started to wander, surveying the landscape and detecting toward areas I thought had potential. I had seen what looked like it could be a cellar hole in an aerial view of the area, and wanted to check it out, so I wandered in that direction.

The cellar hole was not a cellar hole, or maybe it was, I’m not sure. It was large, square, and made of rocks, but it was just a huge square area of rocks piled up about 5-6 feet high. It was definitely one of the strangest rock pilings I had ever seen, and after being disappointed, I made my way down the hill to an area where there were more strange, but smaller square rock piles.

As I’m hunting around them, I look below, and see something thats a dark pinkish color at the bottom of the hill near a break in the wall. I wanted to detect around the break, and was curious what the pink thing was, so I hunted my way down there.

The break produced nothing, so I went through it, and off to my left was the pink thing which I decided to investigate. As I got nearer to it, I thought “Now wtf is that?” It was hanging in a tree, next to the rock wall, and as I got closer I saw that it resembled a clear plastic bag, red at the bottom, and filled with water, so it turned a pinker color toward the top.

I got to within about three feet of it, and I realized that it is a pair of clear, but very long armed plastic gloves, wrapped (tied) around a tree branch, and full of what appeared to be blood and water. It was really creepy, but it also looked like it had something else inside, so I got as close as I dared to try and make it out. I could see something in the finger part of the gloves, and I moved from side to side, trying to get a better view, but purposely staying a few feet back, because, well, that sh*t was creepy.

I finally got a better view where there wasn’t so much blood, and I don’t know if I was seeing things or what, but what I saw was white and looked like a finger inside that glove! Now, I’m sure there is something else that could have looked like white drowned skin, in clear plastic gloves full of what appeared to be blood hanging in a tree in the middle of the woods, but what that could possibly be, I don’t know. And if thats not enough to terrorize a woman alone in the woods, I looked down at the ground below the tree, and saw it was all dug up in like a 3 x 2 foot area underneath where the gloves were hanging. I got chills, and panic set in. I looked around, instantly paranoid, and quickly backed up, turned around, and literally ran through that break in the wall, and back up to the trail.

I didn’t know what kind of sick stuff was going on there, but I’ve watched enough horror movies to know that it was not a place I wanted to stick around.

On my way back to the car, I was thinking maybe I should call the police, but dismissed that thinking it could have been a deer hunter who made a mess and didn’t clean up after himself, rationalizing that I did see many tree stands in the area. Or that it was a sick joke carried out with some Halloween body part decoration. I decided I would get a friend to go back to the site with me, and have another look to determine if I was just overreacting or if it really was something.

It was a great idea, except that no one wanted to go back to the woods to investigate it with me, which was a reality check since I had always assumed men were fearless. The only thing each fearful man said was “Why didn’t you take a picture of it?” Well, gee, I don’t know what kept me from pausing for a moment to pull out my phone while in a panic and not take 5 or 10 good shots of the scary, creepy thing in the tree before I ran away. It might have something to do with the fact there could be some crazy serial killer on the loose in the area who was probably burying the bodies under small, square rock pilings…

And so, I never went back, and I did not notify the authorities, and I really don’t know if that was the best decision, but then again, I really wasn’t sure what it was that I saw, I just know for sure that it creeped me out.

But I did learn that in the future, should I ever come upon anything bloody in the woods, I should say “screw you” to intuition and fear, and take the time to photograph it for everyone.

Comments (16) on “The Creepy Thing in the Woods”