My free time has been pretty limited this past month, so I don’t have any great hunt stories to tell at the moment, but I did manage to get out a few times to unearth a few keepers.

On my first outing, I found a sterling silver spoon.  I haven’t had time to investigate its age or hallmarks, but as far as I’m concerned that’s not too important, because any sterling spoon, (or knife or fork) wins as one of the better finds of the season.

My next outing produced a sterling pen.  Once again, I’m not sure of its age, but who cares–its silver!

I was also lucky enough to find an 1864 Two Cent piece, which is not a very common coin, but I was psyched because its the second one I’ve found this year, but still, only my third since starting this hobby.

I dug this cool button with the Harp on it,

a decorative piece of something?

Then there were the toy Jeeps. Two different sites, two different days, and Jeeps at both places?  I find a lot of toy cars, but I don’t recall ever finding Jeep’s in the past, so I think its kind of weird that I found two in a row like that…. 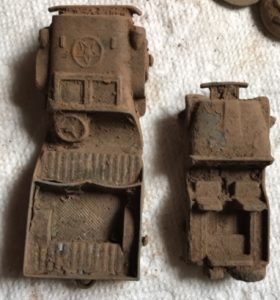 The decorative item below is possibly an old locket type picture frame??  It’s too large to wear as jewelry, and too thin to hold anything other than a photo, so I’m going with picture frame, please let me know if I’m wrong or you have a better guess. 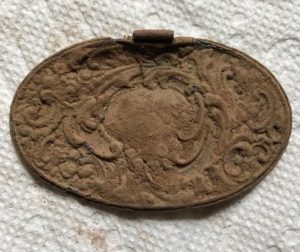 The Grand Finale was this small decorative buckle.

and the leftovers are this collection of a few flat buttons, a Chuck E Cheese token, broken ladle, key, a bunch of clad, and your guess is as good as mine on the rest. 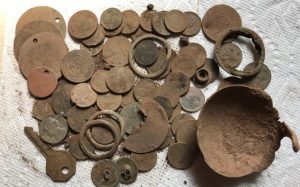 That’s all for now–Happy Hunting!