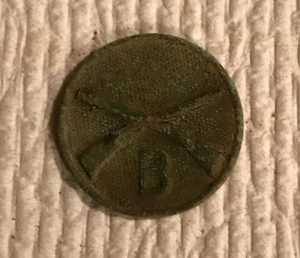 Wow—I’ve heard said before that “you can’t top your best times”, but that really doesn’t make a lot of sense, because there are always more “best times” that come along, so I guess in essence that statement is really kind of silly.

Yesterday was one of those new “best times”—I attended the hunt at The Norton Farm in Cheshire, CT, hosted by Nor’easters Metal Detecting club. The weather was superb, the people were awesome, and the attitude all day long was one of fun and the kind of excitement that only a fellow detectorist can really comprehend.

The hot spot seemed to be by the peach trees, with folks pulling out buttons, large cents, shoe buckles, and a lot of colonial doo-dads. The apple orchard produced some silver, and the parking lot proved pretty lucky for Rich W., who as some of us we were joking that the parking lot was probably full of stuff, promptly dug a plug right there, pulling out a silver half dollar. Kudos Rich! 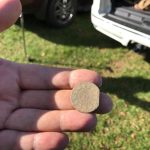 A long time friend, Joe M. found a Fugio, it was his his first, so congrats to you Joe! Joe was also kind enough to gently remind me that it’s been a while since I’ve put a post out on my blog. Obsessive as any hobby may be, sometimes you need to put relationships and other obligations first, and to know when, exactly, it’s necessary to do that. But, it was just enough of a reminder for me to get my butt in gear, and find the time, so here we are. Thank-you Joe.

The Fearless Leader of the Yankee Territory Coinshooters club, Matt D., was slamming it all day, finding a neat counterfeit Half Guinea, a bunch of Dandy buttons, and a lot of other cool stuff. Quite a few counterfeit coins have come out of that farm in the past two years, so it kind of makes you wonder just what the heck was going on there back in the colonial days.

Jeff P. had a nice surprise when he got a nice solid tone while going over someone else’s hole. Apparently that person was either too lazy to dig down an extra inch, or lacked the patience needed for this hobby, because they left a beautiful 1868 Two Cent coin just sitting there for Jeff to find—classic.

CT Todd’s finds included a Hibernia, buckle, copper coin bit?, and a Merit Award pin that he seemed to be quite amused with, and he gave us all a good laugh proudly showing it off. Of course it was all in jest, but I have to wonder if that was really the best find of the day for him, ‘cause it would have been for me. Sometimes it’s fun to find something unusual among the every day colonial coin and miscellany.

As for myself, after doing a walk-a-bout around the perimeter, and not finding squat, I finally made my way to the peach trees. After a discouraging half hour suffering from the dreaded lack-of-finding-anything-itis, I finally pulled out a decorated colonial thingie, and then a large cent. It was an immediate cure for the occassional flare up of this (very real) disorder, but I was still a bit puzzled that I wasn’t finding a bunch of flat buttons like everyone else. Usually my machine is a button magnet, but that’s the way it goes in this hobby.

After a trip to the farm store to purchase some of their delicious cider donuts, maple flavored popcorn, and apple fritters, we decided to leave the farm and meet some of the group who had gone to hunt another farm field permission in a neighboring town.

That field was rockin’! The farmer had just plowed earlier in the day, and the finds were everywhere. The soil was better than butter, you didn’t even need a shovel, when you got a signal, you just stuck your pinpointer in the ground, and either used that to move the target to the surface, or just reached down and pulled it out with your hand. Omg, I wish every day of digging could be like that.

We hunted it for about an hour and a half, and all of us came out of there with a bunch of stuff, and my “find of the day”, which the folks on the FB group “ID Me” were quick to respond was a World War II collar disc. Love that group—Thanks for the info.

Sadly, the sun was setting, so we had to pack it in, but not before a stop at Saints, in Southington, CT, for some of their famous hot dogs with meat sauce. Yummy.

It was definitely one of my new “best times”, and mostly because of the company. The finds were good, but the folks I spent the day with were the best!