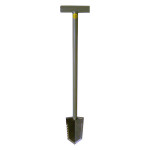 I had just finished writing a piece about the awesomeness of my long T-handle shovel (my digging tool of choice) when coincidentally that same day I came upon an article titled “Carelessness or Ignorance” by Mark Schuessler in the May/June issue of American Digger, about the new “trend” of using long handled shovels.

Mr. Schuessler’s article gave me cause to re-write my own, and address some of the negativities associated with my digging tool of choice.

Before discussing my reasons for using such a “trendy” digging tool, I have to say that I am in agreement with most of what Mr. Schuessler says relating to the use of these long handled shovels.

Some of the negatives he points out are how using a long handled shovel appears to onlookers, they should never be used in public places;  how sites have been lost due to poor digging habits, and how these digging tools (he also includes full sized shovels), even if your an expert at using them, can give the wrong impression.

They are good points, and I have thought about these issues myself, this being the reason I always try to hide my shovel, and the use of it from onlookers.

Now back to why I use the shovel…

I used to use a small shovel purchased from the local hobby shop along with my machine.  The shovel had its place and did a decent job on my targets.  It outlived it’s usefulness though when I purchased a better machine and was able to detect deeper targets. The small shovel had served me well, but there was something which was not serving me so well, and that would be my knees.  The repetitive motion of squatting and kneeling to dig my targets was causing me a great deal of pain.  I was afraid I would have to give up the hobby or risk doing some permanent damage to my body.

Then, on top off the knee issue, while in Zumba class, I tore a ligament in my foot.  The worst one I could have possible torn, according to the doctor.  I was fitted for a boot that went up to my knee and didn’t allow for kneeling or squatting.

Most normal people in my situation would give up their hobby for a few months while their body healed, but alas, I am not normal.  My only concern was how I would be able to continue detecting.

After giving it some thought, I remembered the long handled shovels I had seen some of the guys in my club using.  I reasoned that if I used one of those, I would not have to kneel, but could stand while using it.  I quickly purchased one, it worked as predicted, and my obsession was happily fed while the healing continued.

My use of the shovel didn’t stop after the doctor confirmed my foot had healed.  I had become quite adept and attached to my new digging tool, and discovered that for what I lack in arm strength, I can make up for by positioning the shovel and pushing down with a combination of strength and body weight. I get instant results, and by not having the constant ups and downs to aggravate them, my knees got better also.

Another benefit of the shovel is it comes in handy on those long treks in the woods, or on trails, when at the end of the day; happy and exhausted, you can lean on it for support—like a cane.

I also noticed, due to its construction and self sharpening blade, I could without a doubt use it as a weapon to ward off a menacing person, or in a confrontation with a wild animal or vicious dog.  Anyone who owns one of these shovels and has ever banged it against a tree to remove the excess dirt can attest to their sturdy construction and ability to do some damage as a weapon.

I should also mention that the long handle shovels make great props to rest your machine on if you stick them in the ground.

Praise aside, there have been days when I’ve wished I left the long handled tool at home.  Those are the days when the parks and trails are filled with “onlookers” and I spend a lot of time looking over my shoulder while I dig.

As luck would have it though, this shovel also comes in a shorter, low profile version that fits well in my 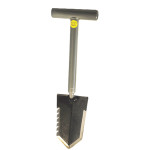 pouch, or backpack.  It works almost as well as the larger version, although I have to lean forward and bend a bit, but once its in position I get basically the same results.

Its true that the long handled digging tools can give onlookers the wrong impression, but for some folks with limited mobility in their joints, or lacking upper arm strength, they can be the difference between pursuing the hobby or not.

I suggest that if you are going to use this type of shovel, be careful, and be aware of your surroundings, so as not to give the wrong impression.

If questioned by a property owner, or curious onlooker, you can always tell them it is a “special” long digging tool designed for people with disabilities, explain your joint problem (real or not), and most people will be satisfied.  Hey-it worked for me.

I’m going to continue to use my shovel in the careful manner I have been, and not because it’s trendy, but because for me it’s a necessity, and if in doubt, I always have my low profile shovel.

9 thoughts on “The Awesomeness of my T-handle Shovel”