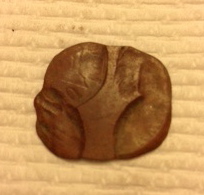 Although the finds have become fewer and far between, no matter how many times I return to my favorite site, it still surprises me with a few goodies now and then.

A few months back, I dug a flat piece of copper which looked like an old penny; possibly flattened by mischievous children on the railroad tracks. Upon returning home I promptly threw it in the miscellaneous junk jar for later review.

After waking up in a low-spirited funk on Sunday morning and vacillating between detecting or not detecting (hard to believe, I know), I decided to grab a cup of coffee and look through the junk jar, hoping to shake my irritable mood.

While reviewing the items, my eye caught some markings on that flat piece of copper, and  I donned my old lady glasses for a closer look. A less blurry inspection revealed that the piece was not a railroad slug at all, it was mis-struck penny–How cool.

I don’t know much about mis-strikes, and some quick research indicated they aren’t all that uncommon, however, the value increases with the number of strikes or if there’s a date on them.

Well, it looks like this penny got beaten up pretty badly, and I’m not sure if you can see it in the photo, but I count 5 strikes (possibly 6), with one of them looking suspiciously like Jefferson’s head, not Lincoln’s.

A pretty cool discovery amongst my junk that definitely lifted my mood, and brought on an immediate case of detecting fever.  It was also a reinforcing reminder to think twice before throwing things away.