My boyfriend is new to the hobby of metal detecting, and when he expressed an interest in trying it, I was a bit skeptical because his hobby is auto racing, and race cars.  I wondered if an E-trac would be able to hold his interest, or compete with the excitement of racing.

Despite my skepticism, his enthusiasm seemed genuine, and I was more than willing to spend a day detecting with him, with the hopes he might get some enjoyment from it, and perhaps we could add it to the list of activities that we do together.

An added incentive to taking the time to introduce him to the hobby, is that his home and property are located in an historic district of central CT, and on his property sits an old barn dating back to the 1800’s, with a pretty good sized field area behind it, and many of the nearby homes date back to the 1700’s.

He had told me that in the past, some detectorist’s had hunted the next door neighbor’s property, and when the neighbor had suggested that he let them hunt his property as well, he had said “no”, because he thought someday he might like to do it himself.

This was the first time I was ever pleased to hear that detectorist’s had been denied permission from a landowner, because now this “virgin” property was all ours to hunt at will.

In the days leading up to our hunt of the property, I received daily teasing reminders of all the “coppers” he was certain were buried there.  However, I took the teasing in stride, because I knew there were no guarantees, and that sometimes even the most promising sites can yield a big zero. I wondered how he would react to getting skunked, but not wanting to plant any seeds of doubt, I kept that thought to myself.

The enthusiasm, (and teasing), was high as we woke up early on “hunt day”.  I had my faithful E-trac, and had brought along my SE for him to use.  As I turned on the Explorer to give him instruction, I realized I had not used the machine in about 3 years, and was not accustomed to it.  I made a quick decision that if my guy was going to have any success, it would be better if I instructed him on my E-trac, which I know so well.

So, after a brief overview and instruction, we walked the perimeter of an area, without headphones, and as he swung the machine, I walked next to him, trying my best to explain the signals, and digging all the targets.  This system seemed to work well, except that I was the one doing all the digging—go figure.

In the interest of wanting him to have a successful first hunt, I had stressed that he ignore the VDI, and dig only the good, repeatable signals. So when we came upon an “iffy” high tone, despite my instruction, my experienced ear told me it could be something good, so I told him we were going to dig it. 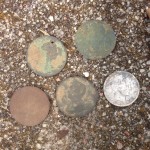 Of course, as is always the way with such things, the target was under a large root, so I enlisted his strength, turned the shovel over to him, and watched.  A few minutes later, out popped a copper, and less than a half hour into the day!  I was so excited for him, finding a copper his first time detecting—it doesn’t get much better than that.

We immediately took it back to the barn to clean it up and have a look under the magnifier.  The coin was in pretty rough shape, but we could make out the letters B R I T… on it—awesome.

After that, I sent him out on his own, and decided to put my SE to use for once.  The VDI threw me, so I ignored it and hunted by ear.  Soon enough, I had two buckles, a large cent and a flat button.  Then I got a very low tone, and assumed it would be another flat button.  It turned out to be a large, thin, coin sized disc with a shiny tombac finish.  I thought perhaps it was a coat button, and searched for a shank. I found no shank, but in the sunlight I could just make out the markings of a coin.  With the low tone, shiny finish, and thinness of it, I figured it might be a counterfeit, but either way, it was still cool as heck.  My last target of the day was a 1902 quarter in decent condition.  I was really starting to like this place.

My guy did well on his own, finding a spoon, buttons, and a neat 1970’s? Sunoco collectible coin (still inside its paper packaging), and as we were wrapping it up for the day, his final target turned out to be another copper.  His first day detecting, and he pulls off a two copper day.  Congrats to him!

The day was a success, and my guy is still enthusiastic about detecting (thank God), but the best part is that we only hunted a very small area of the property, barely touching the field, and haven’t even gotten to the front or back yard yet.

I predict a busy fall season as we re-landscape the property Minelab style.  And even though detecting might not be as exciting as racing, I have a feeling I won’t have to twist his arm to get him out hunting again.

Before I could post the above article about Mark, and his first day detecting, we had our second hunt together, and it went like this:

He goes off, E-trac in hand, and within 20 minutes or so finds himself a CT Copper.  I was thrilled for him, expressed my happiness, and then went back to digging wheatbacks.  As I was dealing with my SE mysteriously turning off every few minutes, and swearing at the garbage I was pulling out of an obvious “fill area”, he comes back over to me with a smile on his face.  So with a tone of expectation, I ask “What did you find?”

I suspected he had a large cent or something similar, but what I didn’t expect was a Trime.  A friggin’ Trime! The item I have been trying to cross off my bucket list for two years!!  I couldn’t believe it.  His second time out and he finds a trime! 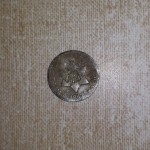 He didn’t know what it was, nor had he ever heard of a trime, but I’m sure he will never forget the look on my face when he showed it to me.  Part astonishment, part happiness, and part envy, because he had found my bucket list item—and on his second hunt!

I promptly told him that I didn’t like him anymore, but he didn’t believe me.  He did, however, in a gentlemanly fashion try to make me believe that it was “our” trime, and that we had found it “together”.  It was a nice try, but we all know it’s just not the same if you don’t find it yourself.

14 thoughts on “Hunting for “Coppers””