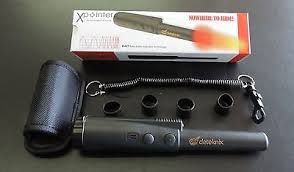 While at the Nor’easters Catskill Hunt this past weekend, I received an X-Pointer pinpointer from the distributor to evaluate and he insisted I would be impressed.

I had recently been hearing mention here and there about the new X-Pointer, and as always when trying out new products, I maintain and eager but skeptical attitude, until I actually see for myself how they perform in the field.  Let’s face it, no amount of demonstration or video’s is a replacement for actually using the product yourself.

I used the X-Pointer for about a 10 hour straight day of hunting on Saturday, and I did not baby it, I really put it to the test.

Now on to the specifics…

This pinpointer has superior sensitivity, and is very stable with NO FALSING, and great depth.

I was extremely pleased with it, and that’s putting it mildly.

I was told that its range was 3 inches or so—a respectable distance, but I have to tell you, depending on soil conditions here’s what I experienced:

After pinpointing my targets with my machine, I was finding that a lot of the targets I was digging were in the 2-5 inch range on my VDI (which we all know is just a guide), yet a lot of them were actually deeper, and I usually start off digging my hole or plug about the same size for each target and work from there.

Sometimes the target is deeper, and sometimes it’s in the plug.  Now with my old pinpointer, it was always a kind of cat and mouse game.  I would dig the plug, search around, and sometimes the target would be deeper than the display indicated.  My old pinpointer was not picking it up, so I would go back over the hole with my machine (annoying), see that the target was still buried, dig a bit deeper, and repeat if necessary.

Of course, we all know what happens when you can’t find the target—you get frustrated and start sticking the pinpointer all over the hole, pushing it in the dirt and against roots, trying to catch a signal, and then it begins falsing on you.  You wonder if it’s really falsing, or if it was actually picking up the target.  Frustrating.

Well… this did not happen with the Xpointer! The only time it beeped was when a target was nearby!

I found EVERY SINGLE TARGET I dug for, and I don’t know if it was the soil conditions, but I felt the range of the Xpointer, in my opinion, was greater than the manufacturer reports.

It was so sensitive, it was identifying targets under rocks and roots at a much greater depth than any pinpointer I’ve ever used!

Looks wise, the X-Pointer is similar in appearance to the new Minelab and Garrett pinpointers, which most people agree is a much sleeker and easier to use design than those old boxy pinpointers.

It has a cap which fits very snugly over the tip, to protect the tip of the probe from wear.  Kudos to the designers for that one–who doesn’t on occasion, use the tip of their pinpointer to help dig a target?

There is also has a very handy security lanyard, with a low resistance coil and a plastic clip for attaching to your belt loop (or wherever).  I found this to be a nice added security feature against accidental loss.

It’s  9” long, takes one 9v battery, and has two push buttons, one is an on/off switch, and the other you can use to adjust the mode

The Xpointer has PI (pulse induction) circuitry, with 4 levels of sensitivity.  It also has audio, audio & vibration and vibration settings, with the alarm and vibrations intensifying as it comes closer to your target.  In addition, there is a low battery alert, as well as a lost mode, where it beeps after 3 minutes without it being used, and is water resistant.

The ability to turn off the sound rates high with me.  With all the discrimination against detectorists that seems to be going on lately, I prefer to hunt in stealth mode; and its nice to have the option of the vibrate only feature to keep away those nosy, and possibly troublesome onlookers.

The Deteknix X-Pointer is a stable performing, sturdy probe with superior sensitivity.  This pinpointer does not false, you can’t get it to false if you try. It’s easy to use and I think it performed better than advertised.

If you want to be the owner of what I believe to be the best pinpointer on the market today, then I suggest you purchase one before you get put on a backorder list, because the more people who try it, the more who are going to want to buy it.

The X-Pointer retails for a reasonable $89.99, and can be purchased from many different retailers (a few are listed below):

The X-Pointer is made overseas, has a two year warrantee, and is serviced by the US Distributor Gold Digger Metal Detectors.