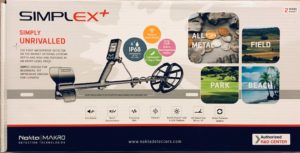 Recently I’d been hearing a lot of hype over the new Nokta Simplex.  I was intrigued, but still not sold on it.  Experience has taught me to view new technology or products with an optimistic, but cautious attitude.  When the XPDeus was introduced, I pined for it for what seemed like an eternity.  I finally broke down and purchased one, and I used it for a while, but honestly, it’s now just a back up machine in case my E-Trac breaks.  I find the tones and chatter it produces to be über annoying and difficult for my ears to tolerate. The menu is also confusing, and it’s a learning curve I lost interest in pursuing. Sad, I know.  I gave it a good shot, it’s a great machine, and I found some great stuff with it, but it’s just not a great machine for me.

So being a little gun shy from my Deus experience, I was a bit more skeptical toward the Simplex than I normally would be towards a new machine.  Then my hunting partner Joe got one, and I saw how “simple” it was to operate, and became all the more curious. I had a chance to see and hear it in action.  It was a little chatty, but not annoyingly so, and even on his first day out with it, Joe seemed to be doing very well.  His first target being a musketball in an area of a park we had been hunting the heck out of for a few weeks prior with the E-Trac and AT Pro.

My interest in the Simplex was peaked, and with price point also being affordable, at a little over $300, it seemed like a great deal, so I decided to get one.

I’m probably one of the most technically challenged detectorists out there, and although I don’t think it’s a good idea to admit it, um, whatever, it is what it is.  People frequently ask me questions about my settings, sensitivity, etc…, and just as frequently get met by my blank “deer in the headlights” gaze. If you want to talk technical, there are plenty of men in this hobby for that—I just know what sounds good, and I dig it—I don’t want complicated, I just want to hunt.

So, the Simplex gets bonus points for being user friendly and easy to operate.  Once I had it in the field, my usual new detector panic set in. It only lasted at most a few moments though, as my instructor (Joe), gave me a brief overview. That was it? A couple of minutes, and I was off on my own—woo hoo!

My very first target was a neat skeleton key, with a tag attached that had “Boat House” engraved on it. There’s nothing better than the first target on a new machine also being a great target.  I didn’t have any expectations, so that made it even better. I thought it was an easy and fun machine to use.  I really got into hunting with it picking up on some of its nuances right away, and here’s what I learned about it in first two days I used it:

*It prefers a fast swing.

*It has great target separation.

*The tones it produces are not annoying. Yay!

*It pinpoints great, and in the center of the coil. You can also use the Minelab wiggle to pinpoint, and its pretty spot on.

*It’s awesome in trashy areas.  With quick, short swings, it will pick those good targets out of the trash, just repeat in small areas a few times if necessary, and in between the chatter they will jump out at you.

*Large cents ring up around 90-93, slightly higher pitch but softer tone than quarters.

*Bottle caps do not ring low.

*Like the E-Trac, it picks up some nails as silver tones.

*Hunting in park mode with sensitivity on high worked best.

The not so good stuff:

*If you haven’t uploaded the update, you can’t pair the headphones.

*Pin-pointer’s interfere with it terribly, but I was told you can adjust that—haven’t got around to that yet though.

*I did not find any oxen shoes while using it, but I’m sure that was just a fluke.

All in all, I was impressed. Its lightweight, waterproof, easy to operate and lived up to the hype.  It’s got the high end performance of the pricier machines, at a surprisingly affordable cost.  I’m going to be using it exclusively for a while to get more accustomed to it, but I reached for the Simplex last weekend, instead of the E-Trac, and without hesitation—so it’s pretty obvious to me that it’s already my new go to machine.

Here’s a few videos of my first finds with it:

And here’s a target chart sent to me by Rich W.  Thanks Rich! 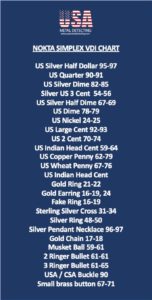