I was going to post this last Thursday before I went to Blackthorne Resorts Lost Treasure Weekend, but I had internet issues, so it didn’t get posted.  I was disappointed, but it turned out to be a good thing in the end, because something happened that I never could have predicted, which makes the ending to this post so much better. 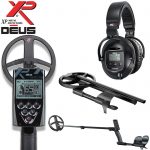 So I got this package delivered a few weeks back, and it said Made in France on the box.  A friend said that perhaps there was a little French man inside, so I checked. Nope, no French dude, but there was a new XP Deus–WooHoo!!!

I’ve been wanting to get this machine for a while, but I’ve always been in love with my E-trac.  Seriously, I love my E-trac.  I think it’s an awesome machine, but my age is starting to catch up with me.  After a few hours swinging, my arm starts to hurt (a lot).  Against my better judgment, I just keep on swinging anyway. I tell myself lies like “You’re building muscle”, and “It’s still early in the season, you’re just not used to it yet”, but the reality is they are just lies I’m telling myself.

END_OF_DOCUMENT_TOKEN_TO_BE_REPLACED

Hunts, Tales of the Hunt