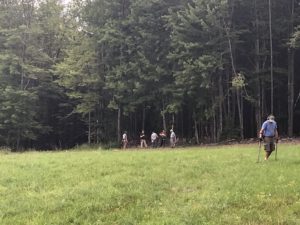 Disclosure: I have to start out with this, because whenever I write something negative or controversial, I get the “My feelings are hurt” emails and texts. Everyone is entitled to their opinion, and this article should not reflect on the hunt itself. The organizers did a fantastic job. Getting sites to hunt these days is not an easy task, and I do appreciate the efforts. This is my personal feeling about a hunt site, it doesn’t mean it was a bad site. There were many who enjoyed it and found good stuff. Would I go to one of their hunts again…absolutely. It just was what it was that day. In other words, “It’s not you, it’s me”.

SITES THAT MAKE YOU GO “EWWW”

Did you ever go to a group hunt, and you just weren’t feeling it? You get all excited, count down the days, pack your gear, make sure you get an early start, and then when you show up and see the site, suddenly you’re like “Meh”.

This has happened to me a few times, and surfaced again at the most recent hunt I attended. I was early, I was in a good mood, all my friends started showing up, and then I paused to survey the field, and my internal reaction was “Ewwww”. There was just something about it. I walked across the street to look at the other field, and it didn’t make me feel any better.

That was the moment I decided this was going to be a social event.

The hunt started quickly, with the hosts giving us the boundaries and history of the area before letting us loose. Most folks were excited and made haste to the field. I took my pessimistic time, talked to people, got my gear together, leaned it against a tree, talked some more, thought about going home, spoke to a few more people, etc… Then a voice yelled from the field “Hey Allyson, thats a motion activated machine”, it was CT Todd, and I had a good laugh over it, but I was having a nice chat with Stef Tanguay, I didn’t want to hunt yet. Alas, I finally did give in and gear up to join the others, but I was reluctant, and it was only because of peer pressure.

I tried my best, but I didn’t like anything about the field. The grass felt icky and dry, the ground was dry, there were lots of bees, they were predicting temps near 100 degrees, and I wasn’t finding squat except can slaw. A friend, Russ Bergensen, came over and offered me the ox knob he had just found. Normally I wouldn’t take someone else’s find, but I think ox knobs are kind of cool, so I took it and thanked him. CT Todd found 2 Indian Head pennies, and directed me to the area thinking there might be more. Again, I normally wouldn’t accept a bottom feed from someone, but on that day, for some reason, it just seemed okay. I didn’t find any Indians, but I really wasn’t trying too hard either.

I tried the field across the street. The ground wasn’t as dry, but it was a steep slope that I predicted would be a struggle to walk back up, so I dug a few signals (can slaw), then went back to the other field.

I learned that we could hunt the wooded area, so I made my way over there thinking it would be great to hunt in the shade. The woods were “Ewwww”. A rough dirt road with large rocks and recently downed trees made walking difficult. I heard someone found a Fugio on the road, and I was thinking “How?” Then someone said the woods had once been farmland, so I ducked off the road into the woods. It was a horror show of downed trees, branches and spider webs. I fought my way out and back onto the field, and that was where I stayed, not hunting, but chatting.  Yes, I talk a lot.

I had 2 cellar holes in the area lined up to hunt as back up sites because it was more than an hours drive, so I was glad for that. I had hunted them before, but that doesn’t mean there wasn’t more left to be found. I asked Dave Wise and Jesse Campbell if they wanted to go. Turns out they had also previously been to one of the cellars, but we decided to go anyway. Finally, I felt like the day might turn out okay.

The site was hit pretty hard, but I managed to pull out an ox knob, and a few baby buttons. Jesse had to leave, and Dave suggested another spot nearby so we went there. It was also a site that was hit pretty hard, and all I found for a few hours time was a spoon, but Dave found what we thought was a large flat button, or maybe a copper. It was thin, and dirty of course, so it was hard to tell. Later on I learned that it turned out to be a whizzer made out of a copper (possibly a KG). Pretty cool, and congratulations to Dave, that was a hard hit site.

So a site that made me go “Ewww”, also made me want to hunt someplace else, and it was a good thing I felt that way, or we wouldn’t have left and dug the few goodies that we did.

Everything happens for a reason. Happy Hunting!