I’m back, but where did I go?  Not far. I’ve been out of the detecting loop for months, but not of my own choosing. This hobby is awesome, but at times the obsession comes with limitations. I knew that at some point the mild pain in my elbow and forearm after a long day swinging a heavy machine might become a problem. It was the reason I experimented with new, lightweight machines like the Deus and the simplex.  I tried each for a while with much success, but no matter how hard I tried, in the end, I always went back to my old faithful E-trac.

I should have tried harder, because at the Best O’ North East hunt in NH this past October, I ended up with a bad case of Tennis Elbow, which was brought on by this problem I have called TMD (Too Much Detecting).  My arm was pretty sore before I got to the hunt, but I ignored it.  I was in NH for a week of all things metal detecting, to heck with the pain.  It wasn’t the greatest of decisions, but live and learn—and I learned afterwards that it really sucks not to be able to swing a machine for months.

My arm finally started to feel better around the beginning of February, and I was excited to get back out there, but then I found out I needed surgery, not for the elbow, but surgery nonetheless. 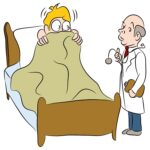 I have a fear of doctors, but not the actual doctor.  It’s a fear of going to the doctor, because every time I go, I find out I need surgery for whatever I’ve ended up in the office for.  I’d had 9 surgeries already in my life.  Most were odds and ends to fix or repair some defect, that thankfully modern medicine had a cure for, but still, for obvious reasons I avoid the doctor.  Sometimes though, it gets to the point where you can’t ignore it anymore. Such was the case this time around.

For the past few years, I noticed my stomach area slowly becoming larger and larger. I tried diets, diet pills, Zumba, and became obsessed with core exercises, trying to lose it.  But, while other parts of me (occasionally) got smaller, my stomach just got bigger. I was perplexed.  Then someone suggested it was part of aging, and that as our bodies age, the weight gets distributed differently.  I thought about the figures of some of the older women I knew, and it seemed like a rational explanation.  So I gave up on the fruitless exercise, and began practicing acceptance, focusing on finding clothing that would play down my stomach area (like tunics & girdles).

Naturally when I stopped exercising I gained weight, but at least now the rest of me looked more in proportion to my mid section.  Sad and a bit funny, but true.

When I finally went to the doctor he concluded I had a large mass in my abdomen that needed to be removed, um… I could have told him that. He said the recovery would be 6-8 weeks.  My immediate thoughts were WTF?  6-8 weeks? Does this dude know I have to get back to detecting?! I was upset, but it was what it was, health trumps all, and I knew this too would pass. 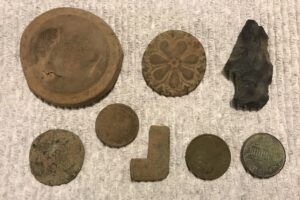 So I went under the knife again. It was a pretty invasive procedure, and 8 weeks turned out to be a good number for recovery—but I’m happy to say I’m on the mend.  I finally got the doctors okay to resume exercising, and just in time for the new hunting season!  I attended a club hunt in Windsor, CT last weekend, and it was tough. I was tired as heck, and sore afterwards, but I did find a few buttons, a rosette, and a broken arrowhead.  It was good enough for me though. I was just thrilled to be back out there, and happy I’ll have something to write about again.

I did my first 8 hour day of detecting Saturday at an abandoned Boy Scout camp and came home with 8 pieces of silver for my efforts. Not a bad return, seeing as I’ve been out of the loop for so long. I really felt I deserved those coins, and was happy the detecting gods seemed to be back on my side again. 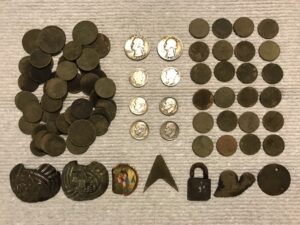 I also hit on one of the largest clad spills in my detecting career.  I pulled out a Rosie, and when I rechecked the hole, it was ridiculous, I stopped counting at 25 coins, and they just kept coming. I spent a good twenty minutes picking coins (mostly pennies) out of a one foot area, because you never know, there could have been another silver in there. Sadly, there was no more silver, but I found more later on.

After so much time laying in bed, I’ve got a lot of work to do this season to get back in shape, but at this point I’m just excited to be back to a sense of normal. Mentally and physically.

The past 6 months was definitely a learning experience, and to sum it up—Can I live without detecting? Yes.  Do I want to live without it? NO.

5 thoughts on “Getting Back into the Swing”