Oh, hey–it’s me. Yup, I’m still here. Thanks for all the emails and messages inquiring as to my whereabouts. I could say something smart like “Well, I’ve been out detecting”, but seriously, sometimes life intervenes, and I just can’t find the time to post as often as I would like.

You’re probably wondering (or not) just what has kept me so busy…. Just life, a change of schedules, less free time, etc… You know–stuff.

So what’s new since last I posted…

Most recently, my not so fabulous Volkswagen, the only car I have ever owned that I suspect hates me (and my metal detector), died again. There I was, just cruising along the Merrit Parkway on a nice Saturday morning, thinking that on my way back home I could stop by my old favorite site–and suddenly, without warning, as I’m in the passing lane, in the midst of passing someone, my car loses all power. No danger there.

If you live in New England, you probably know that the Merit (Route 15) in CT is not the place you want your car breaking down. There’s no breakdown lane, and folks don’t slow down for much. After maneuvering my vehicle onto the shoulder, my 2 hour drama of trying to get towed began.

Dealing with Geico roadside assistance was not a pleasure, and although I normally don’t get angry at people who are supposed to be helping me, I got a bit snippy at this MORON on the other end of the

phone who spent 45 minutes trying to figure out my location. It must have been difficult for her to comprehend “I’m a few miles past the Heroes tunnel, heading south toward NY on Rte.15, aka Wilbur Cross Pkwy, aka Merit Pkwy, before exit 58“. She wanted a mile marker (there weren’t any), and a point of reference (um… woods as far as I can see). Then she tried to find me through my iPhone, but couldn’t seem to locate me, and yes, location services was on. Like I said, 45 minutes of BS with this woman, and then she told me the tow company said towing me home was a little too far for them. It was a little over 20 miles–Really?? I told her this whole experience was ridiculous and I would call someone else, but I wasn’t as nice to her as I made that sound.

So I call my guy, and I call, and I call, and no answer. I wait a few minutes, call again, and again, and again… Where could he be? Out detecting? More like sleeping with the phone volume off. So I enlisted the help of my next door neighbor to go bang on the door and wake him. Thank you Heather!!! He’s a take charge man, (thanks Babe!), and I knew I would be okay once I spoke to him.

He talked to the tow company, and triple A, which should have been my first call, but I couldn’t find the card quick enough in my large, stuffed, suitcase like pocketbook during the moments immediately following my breakdown panic.

So, Triple A to the rescue, I had a police vehicle for safety within moments, and a promise that a tow was on the way. Oh, and AAA didn’t have a problem figuring out where I was, or towing me as many miles as I wanted–go figure.

So what does this have to do with metal detecting, besides me suspecting my VW hates detectorists or anything detecting related?  And that without a car I can’t go detecting…

Well… The nice officer who came to the rescue, just happened to be very interested in metal detecting. He was a former police officer, now an EPA officer. So while waiting for the tow truck, we talked about metal detectors, finds, hunts and locations. It’s always a pleasure to talk to someone who’s interested in the hobby, and especially to someone who’s always wanted to try it, but is hesitant because they don’t know much about it.

We also talked bears, bobcats & mountain lions (Scott K. the answer is yes). I got to see some neat pics of bears, and now I know why the are always up in a tree when they tranquilize them–so they don’t run–duh! I don’t know why that concept never crossed my mind. I just thought bears liked to climb trees when scared. Yup, I’m not always the brightest crayon in the box…

Anyway, the foul mood was lifted, I had a new friend to introduce to the wonderful world of Minelab, and in my mind I gave my VW the finger, while talking metal detecting–did you hear that you Wolfsburg

piece of …..!  No matter how hard you try to keep me from hunting, I will prevail! You can wipe that smirk off your bumper for making me miss Blackthornes Lost Treasure Weekend–was that payback for me driving you to the BONE? I know you wanted to break down up in New Hampshire, but you must have known that if you did I would have just left you there–forever. Yes I’m talking to my car, it’s making me crazy!

And since I’m on the subject of the BONE, what the heck, it’s been a while, so I might as well include that here too and make this post super long.

Skunked at the BONE

Before my VW drama, I was up at the annual Best O’ the Northeast (BONE) Hunt, in New Hampshire, April 19th-24th, and after three days of hunting with not much to show for it, and with a hint of sarcasm, I said I was going to entitle my next article “Skunked at the 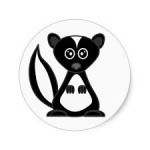 BONE”. Immediately someone said “Oh no, you can’t say that, George will get mad”! I resisted the urge to respond, because that person was obviously unaware of my somewhat sarcastic nature (i.e. not one of my detecting buddies) but now that I’m thinking about it, why can’t I say I got skunked? And why should George be mad if I did?

“George” is George Streeter, the one who has been responsible for I’ll assume, 23 BONE hunts as this was the 23rd hunt. My lack of finds aren’t George’s fault. He wasn’t the user of the machine, nor did he decide where I was going to swing my coil. The hunt location was good, the area was large, and it had historic significance.

I wasn’t the only one who didn’t find much, but there were also those who did very well. Having a bad day of detecting is usually the exception for me (even though theres really no such thing as a “bad day” detecting). I’m just used to finding coin(s), or something really cool on every hunt. However, by day three of the BONE, I had only a handful of buttons, no old coins.

I convinced myself there must be something wrong with my machine, and tried many different ways to remedy the situation, then finally in desperation, I hit the factory reset mode, hoping I might have screwed up a setting (like accidentally putting it in the “you’re not gonna find sh*t” mode), but still no luck.

Sadly, as the days went on, and the signals were few, my attitude did a nose dive. Even after side excursions to other properties in the area, my finds remained meager, so I can’t blame it on the site of the BONE, just myself. After verbalizing my frustration, I sighed a great big sigh, humbled myself, and focused my attention on being über enthused about flat buttons, and colonial miscellany. Woo hoo!

Technically, I did not get skunked, because I did find stuff, but in my mind, I got skunked because I did not find what I wanted to find. Detecting is part luck, and part skill, and I began to doubt my skill, because I wasn’t having much luck–that could have been part of the problem right there.

So now that the BONE is over, I was asked if I would go again. My answer to that is “Absolutely!” It was, in a word, Fun. I had a great time. I saw and hunted with folks who I hadn’t seen in a long time, and hung out with some fellow club members, and new friends who were so much fun, I can’t remember the last time I laughed so hard.

In the end, it really didn’t matter that I didn’t find any coins, and I was reminded by a newbies excitement over his first oxen shoe, why I got hooked on this awesome hobby in the first place. I was just happy to be there, doing what I love to do most, and hanging out with folks who are just as obsessed with digging in the dirt as I am.

Events like the BONE are not all about what’s found, it’s the people, the thrill of the hunt, and the camaraderie that make it what it is, and I think that’s why the BONE is still around after all these years. So thanks George, I had a really great time.