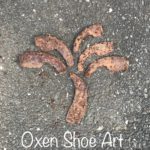 Technically the title should be Confessions of an expert ox shoe finder. Ox is singular, oxen is plural. I know that, but I like the way oxen shoe sounds over ox shoe, so if you’ve got a problem with that already, don’t continue, but if you can deal, then read on…

The first oxen shoe I found was an enigma. Because of its odd shape, I knew it must have had a purpose, but what that purpose could possibly be was puzzling. After trying to research it with no luck, I threw it in a box with all my other rusty mysteries.

As time went on, I kept finding more of these odd shaped items, and although I didn’t think they were necessarily valuable, I figured if there were a lot of them, they must have been useful for something. I found out what they were, quite accidentally, when I was researching old farm tools online, and just happened to stumble across a photo of them. They did have a purpose, and a very important purpose at that—Oxen shoes—mystery solved.

I can only imagine what my colonial era ancestors reactions would be to me not knowing what they are. I assume it would be the stockade or perhaps a scarlet “O” worn on my chest for proper public ridicule. But how would anyone in this century know? I mean, I know what an Ox is from books I read as a kid, and the occasional viewing at a county fair, but oxen are no longer a part of everyday life, with their usefulness dwindling along with the farms. Its amazing that oxen shoes, something that a few hundred years ago were produced for necessity, and probably every blacksmiths number one best selling item, are now just rusty old puzzling pieces of iron confusing newbie detectorists one shoe at a time.

So what was the great purpose of the Oxen who wore these shoes? Well, it just so happens, that I’ve compiled a brief history of the mighty ox for you:

Oxen have been around and in use since at least 4,000 BC. They are also known as bullocks in some countries. They are working animals used for plowing, pulling wagons, moving stones, removing stumps, pulling millstones for grinding grain, and making roads. They are mostly males, and usually castrated, with the females being used mainly for reproduction. They are called steer until they reach the age of 4, then they become known as oxen.

Oxen were mostly used in pairs ( that’s why they are usually referred to as oxen), and for heavy work sometimes 10 or more pair would be yoked to a wagon. Oxen were strong, could survive under conditions that would kill a horse, preferred cool weather, had a calm demeanor and had no fear of water, which made them well suited for working in the wet fields and swamps of New England.

Their importance continued throughout the 18th and 19th centuries, and even after most of America had given up on using the ox, they continued to be used in New England because they were well suited for the needs of the New England farmer.

Hard working oxen need to be shod because they wear their feet down. Hence, the oxen shoe, and with all the oxen used in settling this country, that explains why so many are found out in the field.

You might be asking yourself “Self, I’m curious, how did the Diva become an expert oxen shoe finder”, but probably not, so I’ll just lay it out for you:

I’m not a relic hunter per say. I find a lot of relics, and some of them are cool as heck, but I’m partial to finding colonial coins, buttons, buckles, etc… Using a Minelab E-trac for almost 10 years, and having it set to ignore most iron keeps me from digging a lot of junk (i.e. rusty stuff), but those darn oxen shoes fool me every time.

I get the signal (their signals vary widely), but they are, with the rare exception, an iffy signal. There is no chirp on the end of the tone, which is usually and indication that it’s not something I want to dig, but its not a clear signal either. Its kind of like a mid tone, but sounding weird. Now with the E-trac, and other machines, when you pinpoint a target, if its really loud, its usually a large target or a target that’s near or on top of the soil. This is not the case with an oxen shoe. It tends to ring with the usual volume, unless of course it is laying on top of the ground, after being left there in exasperation by a previous detectorist—Sometimes, if you listen really hard, you can still hear the echos of that persons loud swearing as it was discovered. True story.

Anyway, my mind starts thinking oxen shoe, and my machine is trying to tell me its one, but I just can’t ignore the signal. It could be something good—you never know. But as I’m digging, subconsciously, somehow, I know what its going to be. Yet I dig on until my treasure is revealed, and yup, there it is, another one, fooled again.

I guess you could say I’m not really and expert oxen shoe finder, I’m more like an expert at getting fooled by their signals, so that would make me more of an oxen shoe fool. Either way, I still have the uncanny ability to locate every one within a 500 foot radius at every site I hunt, so thats got to count for having “expert” status. A self proclaimed status, but an expert all the same, and it’s not like anyone is going to challenge me for the title.

But over the years, my uncanny ability to find them has developed into a real fondness for them. Sometimes, when I’ve had a good skunking, I can still end the day with an oxen shoe for my efforts. Then I line them all up with my horse shoes, ax heads and other rusty stuff, in the driveway next to the garbage cans. They usually stay there for months until I decide to throw them away. There’s a kind of sentimental attachment that occurs when I see them there all lined up, and I’m not always ready to let go. Thankfully though, I eventually succumb after realizing there will be another half dozen or so to replace them soon enough, because, after all, I am an expert at finding them.

And P.S. you know the first one you ever found was really cool, for like a minute.

Comments (10) on “Confessions of an Expert Oxen Shoe Finder:”